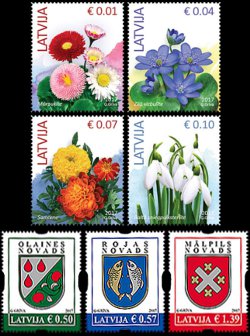 03/02/2017 - As every year, this one was no exception for Latvijas Pasts (Latvia Post office) to release the reprint of stamps from existing series and to add new issues.


On the 13th of January a new set of 7 stamps was issued from these two series: Flowers (Standard Edition) and Coats of Arms of Latvian Towns and Municipalities.

All technical features of these stamps are the same of previous issues.

Our newsletter will keep you up-to-date with the latest changes to our site. Join us. It's free!